Girls with white-silver hair are not something usually that you encounter in real life every day, however, in Anime, girls with this hair color are extremely popular, in fact, some of them are considered the best Anime Waifu of all time.

In this article, we brought you our best picks! the Top 15 Best Anime Girls With Silver – White Hair.

Please let us know your opinion down below! you should also turn on the notification bell to this website so that you get notified when this list is updated.

Nao is a very capable student and is also very intelligent. However, she appears to be a bit too self-obsessed and has a short temper. Nao is a typical tsundere as well. She’s very straightforward while talking to others.

Nao has trust issues because of her past and rarely puts her trust in anyone. She absolutely adores children and likes spending time with them. Though she doesn’t look like it, she does care about her loved ones and the people close to her.

Shiro is a very energetic and bubbly girl who is also very childish. All her energy comes from the sweets she eats all the time. Shiro could always be seen as happy and cheerful all the time. She lifts up everyone’s mood around her. She got very close to Ganta and wanted him to be happy and protected.

Shiro is very strong when it comes to actual combat and will do everything in her power to protect Ganta. Overall, Shiro is a very adorable little girl who puts a smile on everyone’s faces.

As a Captain of the Tuatha De Danaan, Teletha is a very skilled strategist. She has saved the skin of her teammates many times because of her great military strategic skills. She didn’t like it if somebody tried to look down upon her.

Teletha did everything in her power to prove them wrong about her being incompetent. One interesting thing about Teletha is that she likes to play with her ponytail which is just so cute!

Kanade appears to be an emotionless girl who is very hard to read. Nobody can tell what’s going on inside her mind. She also appears to be very mysterious.

The things Kanade likes doing is gardening and eating Mapo Tofu. Kanade is shown to be quite intelligent as well.

Ririka is a very reserved and observant person. She appears to be very calm, composed, and cold when she’s wearing her mask. However, without her mask, she’s very shy and nervous.

She’s mostly overshadowed by her twin sister who has a completely different personality. She used to be insecure initially in the series but quickly gained confidence after interacting with a bunch of other girls.

Origami is a very reserved girl who rarely likes to speak unless needed. Whenever she speaks, she speaks bluntly. She’s very goal oriented and can become very aggressive while chasing her goal.

Origami absolutely despises all kinds of spirits because they killed her parents in the past apparently. Origami gradually became power hungry and that turned her into a spirit eventually, making her hate herself. As the series progressed, Origami was able to open up more and became cheerful and friendly.

Koko is a very mysterious character who never reveals what she’s feeling or thinking. She’s friendly, cheerful, and easy to talk to though. She tends to get frustrated easily and throws a tantrum but quickly becomes normal.

When in danger, Koko never loses her cool but is seen smiling. She has a certain charisma that is able to impress others. Overall, Koko is a fun person to be around with.

Elaina is a very talented and capable witch who doesn’t know when to give up. She’s a kind and caring lady who is also playful sometimes. She’s also very knowledgeable about most things.

Sometimes, Elaina has to play tricks on others in order to get what she wants. But overall, Elaina is a very kind and compassionate individual.

Komugi is a very immature and not-so-intelligent little girl who doesn’t know when to stop speaking. She also doesn’t know how to speak properly. Komugi tends to look down upon herself.

Komugi is very friendly and kind towards others though. She hates being a burden and won’t even call someone for help even when she’s in danger.

Fena is a very cheerful, kind, and loving lady who is also very pure. She looks fragile but she’s fragile. She has a strong sense of justice and doesn’t tolerate injustice.

Fena is shown to care greatly for her comrades and puts their safety first. She does act immature sometimes though. Overall, Fena is one of the sweetest anime girls.

Emilia is a very kind, caring, and cheerful girl who always puts others before her. Even though she’s quite talented, she gets very insecure and is not confident at all. However, after getting to know Subaru more, Emilia grew confident and came out of the bubble that she created around herself.

Overall, Emilia is a good-natured girl who always wants the best for her loved ones.

Mirajane was feared when she was young because she was known as “The Demon”. She was not very fond of Erza and often got into fights with her. Mirajane also had a nasty temper and used bad language a lot.

In the present, Mirajane is very kind and loving. She was very protective of her comrades and developed a motherly nature. Other than that, Mirajane hates being called stupid and also doesn’t like cockroaches.

Kei appears to be a reserved and serious girl just like her elder brother. She’s also a capable student and a true hard worker. She’s mostly calm and composed. Kei knows her family situation and spends money carefully.

Kei enjoys the company of Chika and her little sister, Moeha. Kei also appears to be a little rebellious due to her age.

Alice Nakiri hails from a prestigious family but doesn’t let it get to her head like her cousin, Erina Nakiri. She is a very skilled artisan and understands the dynamics of food really well.

Alice is quite friendly and easy to talk to. She loves ordering and manipulating people. She doesn’t tolerate people not listening to her. She also tends to throw tantrums when things don’t go her way.

Lena was born into a noble family but is very different from other nobles. She actually cares about the Eighty Six that were treated like trash by her own people. She’s shown to be a very strong-willed woman who is determined to bring out the Eighty Six from their miserable condition.

For that, she took a lot of risks. Lena is a little naive as well. She doesn’t understand the politics that’s been going on inside the Republic. Overall, Lena is a very kind and helpful person who puts others first.

READ: Why We Love the 86 Eighty Six Anime 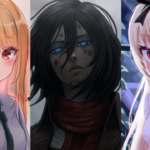 Why Chainsaw Man Will Break The Internet ?!